We, the ATMA and IRRI team were waiting for around two hours in the ICMD demonstration field to meet Mr. Swapan Das, a progressive farmer of Gingia. He has been allotted one ICMD of BINA Dhan11 by DAO, Sonitpur under APART. We were not irritated though waiting time was extending from half an hour to 2 hours. It also started raining but we waited in the field eagerly to meet the farmer.The reason behind his late coming will actually make youamazed! He went to BiswanathChariali for clearing tax related issue of purchasing potato seeds of Rs. 2 croresfor cultivation in their field in the rabi season.He is leading the procurement of potato seeds for all the potato growers of Gingia. Farmers from Assam purchased potato seed of Rs. 2 crore! Quite inspiring!!

Gingia, a gaon panchayat is about 10 km away from Biswanath Chariali town. It is becoming a place of interest for all who are associated with agriculture development in Assam for its wide scalecommercial cultivation of potato. In exception to most of the farmers in Assam, who have traditionally remained content with a single crop per year, Gingia farmers have been growing two or more crops in a year.Traditionally majority of the farmers are following Salipaddy-potato crop sequence in their field.They generally grow Ranjit or Joy Bangla paddy varieties which are of long (145 -150 days) duration.

Finally we met Mr. Swapan Das in the field itself. He was quite happy with the performance of the BINA Dhan11.

In his own words“We really like this variety. Its short duration (around 120 days) is our advantage. Our target crop is potato and paddy in a sequence. So paddy and potato harvesting must be on time or before time. Otherwise the sequential crop will be affected.There is also a possibility that we can have three crops in a year in a crop sequence like Sali ( BINA Dhan 11) - Potato- Boro (BINA Dhan 11) or Sali (BINA Dhan 11)- Potato- Potato. If the Sali paddy variety is early maturing than we can definitely plan for any one of the crop sequence that is suited for the farmers. Since this is for the first time we have tried this BINA Dhan 11, farmers have experienced its quality and yield potentiality.The most interesting point is that the produce is already booked to be used as seed for the next Sali season. I thank APART, ATMA officials and IRRI for providing us such a wonderful variety that addresses our needs. We are open to any kind of suggestions/recommendations from scientists /experts to double or triple our income in future”.

In Gingia, potato sowing time, as the farmers said during discussion, is 1st week of Oct. to 15thof Oct. So, early maturing variety with high yielding capacity is an added advantage for them in order to maintain the sowing time of the next crop. Though the farmers cultivated many paddy varieties during the last few years, they are still in search of a variety that is short-duration and high-yielding. In this Sali season, few farmers tried BINA Dhan 11 as they got demonstrations under APART. One interested farmer even grows the variety at his own.Harvesting is still to be carried out; they are yet to get the actual yield from the field. No doubt,the spectrum of opinion will be for the unprecedented work, but the farmer’s experience is paramount for planning the development activities in the area. A combined effort from all line departments and organizations can help the Gingia farmers to plan for 3 crops round the year.

“If the rice is harvested in October, we can go for the 1st batch of potato cultivation in November.Early harvesting and selling of potato is economically profitable. The 2nd potato crop, though we tried earlier was indeed successful but at the same time there are lot of challenges too. There are biotic and abiotic challenges. The potato size becomes smaller, thus the market value decreases. But we can go for the 2nd crop for the seed purpose. If we practice zero tillage technology for potatoes,we have some hope that we can have good results in the 2nd crop too. The Zero-tillage technology with surface retained residue confer sufficient moisture in the field.BINA Dhan 11 can take a major role in the crop sequence”a progressive, energetic farmer Tapash Bikash Dutta said.

Perseverance, hard work and punctuality of the Gingiva Farmers will not only be an example of successful commercial potato farmers, but also set an example on how a technology savvy farmer can multiply their income within a stipulated period!! 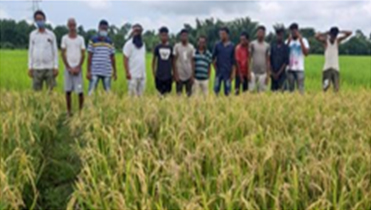 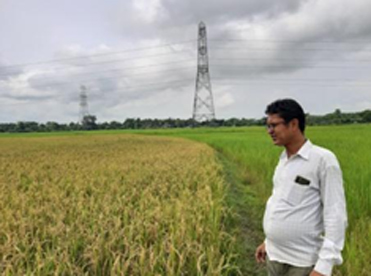 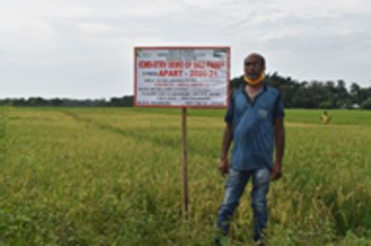